Building a Better Community: Feeling the Need for Speed! 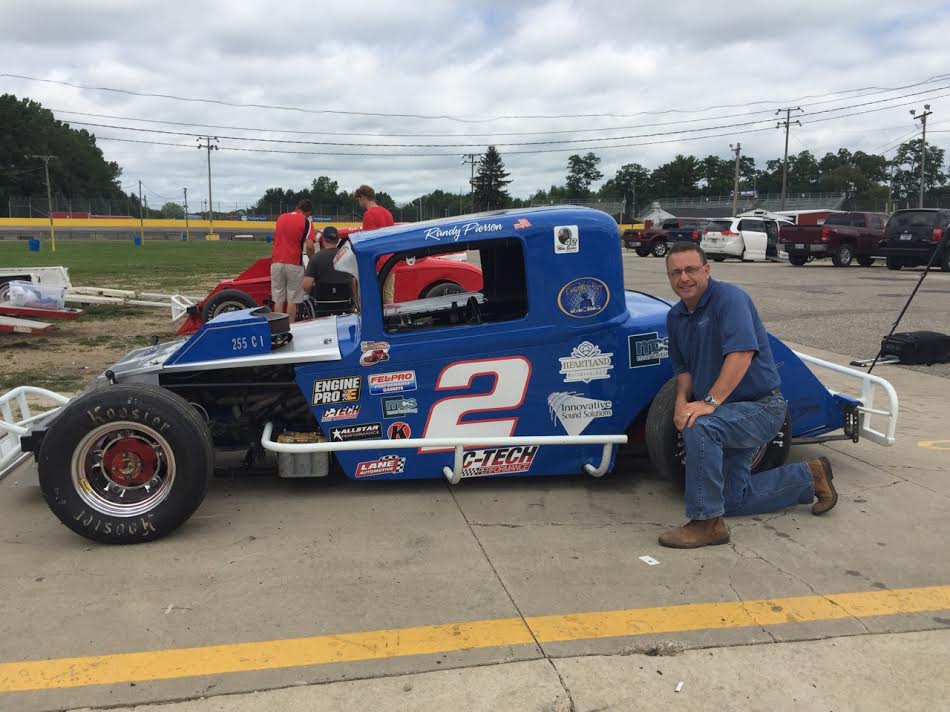 Most Thursday afternoons you’ll find us at one of our various job sites soaking up the sunshine and enjoying the smell of fresh wood – but last Thursday we spent the day at the Berlin Raceway getting our speed on and relishing the smell of exhaust fumes with our friend and former client Chuck Pierson, pictured below in the center.

Chuck’s just a regular guy, but his story isn’t. He’s been inspiring us ever since we built his home for him in 2003.

Chuck’s always loved fast cars. While drag racing in high school, he was in a terrible accident that left him paralyzed from the chest down, and he’s been a wheelchair user ever since. He may have lost the use of his legs, but not his love of speed! Chuck is the owner of Pierson Motorsports, a Vintage Racing Organization of America race team. Heartland Builders has for years proudly sponsored the #2 car that’s driven by Chuck’s brother Randy.

A fellow race team owner, Ken Deymon, told Chuck one day a number of years ago that he should be out there driving. Chuck replied, “I don’t think that will ever happen.”

But Ken was determined to see Chuck driving one of the cars he loved to watch.

So Ken and his team fixed up an old car to work exclusively with hand controls and built it with a removable roof so that a driver could be lowered into the car. Randy worked with his dad to fix up and paint the car to look like Chuck’s favorite driver’s car – Rusty Wallace.

When shown the finished product, “I was so excited!” said Chuck. He ended up driving that car up and down the streets of Cedar Springs that night and he’s driven it once a year since then as the pace car for one of the races held annually at Berlin Raceway.

Chuck wanted to give others in a similar situation the opportunity to experience the thrill of driving a racecar, so he created one for them. This is the third year that he’s hosted a day at the Berlin Raceway for other wheelchair users to take some laps around the racecourse in his specially-equipped car.

We spent last Thursday at the Berlin Raceway, honored to volunteer alongside a number of Chuck’s supporters who also take a day off from work to help these individuals with disabilities experience the thrill of commandeering a racecar. Special thanks to Channel 13 for telling Chuck’s story too!

Some of the drivers returned this year because they loved the experience so much. After Pat’s first racetrack experience, he bought a Dodge Challenger because it was the closest he could get to a racecar for every day driving! “It looks easier on TV!” he said. “It feels like you’re flying and you can see the banks coming up, and the sound of the motor really gets your heart pounding!”

Back for a second time, Vicki explained that this was something that most people never get to experience – driving a race car on a race track – and the fact that she gets to do it as a chair user is just amazing! She is now trying to figure out how to run the course so she doesn’t have to slow down much.

It was Mark’s first time driving a racecar, but he wasn’t as concerned about driving (his vehicle has hand controls) as he was about being able to fit into the safety gear and getting into the car because he is quite tall. He took his younger daughter for the drive with him and said it was even better than he’d expected!

Adam, another first-timer, has limited arm strength so he rode as a passenger with Chuck. He noted that it was really hard to go straight! He loved the experience of sitting shotgun!

Chuck even took Cindy for a spin!

You might not have known it, but it was building Chuck’s fully accessible home – complete with a zero-step entry, wider hallways, a turning radius in all important rooms – that hooked us on the merits of universal design, one of our signature design elements.

Chuck is the reason we became proponents of Universal Design! His accessible home made his life easier and more enjoyable, and our clients through the years have reported similar sentiments about the universal design elements in their own homes.

Thanks Chuck, for inspiring us in our work.

This year we’re celebrating our 20th anniversary by giving back to the community that has helped us build our business. Thanks, Chuck, for allowing us to partner with you in building a better community for us all!